It was a bit scary for a time last night when a raging storm roared ‘up’ through Cumberland County.  Typically, storm systems come from the west and travel toward the east as they cross over the Plateau.

This line of storms came from the south and traveled a north northwest path. Entering the county at the Bledsoe County line and taking highway 127 all the way up to Fentress County.  The storm intensified when it reached the northern part of the county – Lawson Road to be exact. There, several homes and autos were damaged by high winds and possibly a tornado.  Two cars wrecked on Bear Creek Road in the Rinnie Community when they came upon a washed-out part of the road. 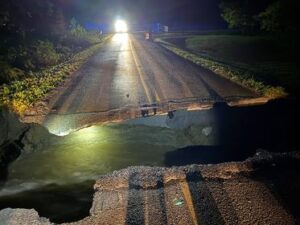 Power was out for hundreds of homes in the area, several roads washed out and many trees were blown over.  Flooding and road damage forced Cumberland County Schools to run on a two-hour delay opening schedule. It is somewhat rare for a storm of this strength to form this late in the year but it can and has happened – many recall the deadly tornado outbreak of November 10th, 2002 which started in Bledsoe County and traveled north into Cumberland County destroying homes and causing four fatalities.