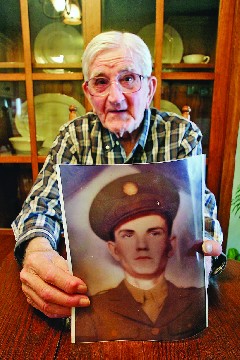 His destination will be a strip of land along the coast of Normandy, France. The place has long had a French name, although almost no one remembers what it is. It’s better known as Omaha Beach.

When Allied forces went ashore in Normandy on June 6, 1944, troops landed on five beaches, as well as thousands of paratroopers landing inland. There were casualties among all of them, but Omaha Beach was the bad one, the one where the German army almost beat back the American soldiers.

Brannan, now 94, was one of those American soldiers. He waded through thigh-deep water from a landing craft in the third wave and arrived on the beach about 7:20 a.m. He was supposed to be there sooner, but few things went as planned that day.

“They held us up for 40 minutes,” he recalls. “I heard later that the general in charge was calling, ‘Send the boats back. It isn’t going to work.'”

It did work, but not before about 5,000 Americans out of the 34,250 who went ashore were killed or wounded.

Once on dry land, Brannan said, he had made it about a half mile inland by noon. It had not been easy going.

Sometime around noon, Brannan had his left hand mostly blown off by a hand grenade.

His hand bled for about 48 hours after he was hurt. A medic tied his arm up overhead to finally stop the bleeding. They then set out for England.

On this trip back, Brannan said he plans to get a much closer look around the entire beach, including a museum that is there.

Brannan said this trip is not going to be his last to Omaha Beach.