Dating back to 2004, there has been a highway renewal project in development by Tennessee Department of Transportaion to revamp the Homesteads intersection of  US Highway 127 and state Route 68 at the Homestead Tower and Museum.

Right-of-ways were even purchased by the state including the Cumberland General Store which was removed in 2007. Originally TDOT had plans to drastically change the intersection which would ultimately remove what is called “The Historic Triangle”  That idea did not sit well with local historians who fought to preserve The Triangle as it was originally designed during the formation of the Cumberland Homesteads Project in the 1930’s.  Matter of fact, most all roadway intersections in the Homestead community were designed as “Y” intersections instead of typical 90 degree “T” intersections.  After a lot of back and forth discussions between the “Save The Triangle” committee and TDOT – the whole project was put on hold-until now.

Last week TDOT issued a press release saying they plan to start the re-routing and construction of the “Triangle” intersection next year. However, the press release stresses the historic Triangle will be kept in tact. The press release also states that the revamping of the Triangle intersection will be much safer for traffic flow, pedestrians and provide more parking area for the Homesteads Tower and Museum.  Currently, it can be somewhat risky to make a left turn onto U.S. 127 toward Crossville coming from the Pikeville direction as well as making a left turn from SR 68 onto U.S. 127 South toward Pikeville due to low visibility of oncoming traffic. TDOT’s initial plan (diagram below) is to place a traffic signal at the intersection of U.S. 127 and SR 68 and close off the section of highway that passes in front of the Homesteads Tower and Museum – making that a parking area for the Tower.

The intial drawing, which is subject to change, shows Deep Draw Road reconstructed to a “T” intersection replacing the current “Y” intersection onto highway 68. The ‘new’ plan also includes widening of the highways in all three directions for about a half mile toward Spring City on highway 68, toward Pikeville on 127 south and north on 127 toward Crossville.

The project focuses primarily on improving safety and pedestrian access while preserving the character of the existing triangle greenspace that is of great importance to the community. This new design reduces the risk of potential crashes by lessening the skew of the intersection and decreasing the number of conflict points. It improves operations for current and future traffic demands, includes sidewalks for pedestrians accessing Homestead Elementary School as well as the Homesteads Tower Museum, and provides additional parking spaces for the museum.

The right-of-way for this project has already been purchased and no additional property will be needed for the new design. The project is scheduled to be let to construction in Summer of 2022. (Below is the tentative proposed highway digram with changes outlined in yellow) 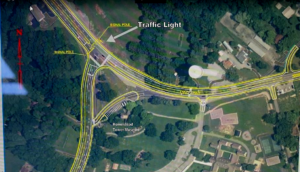